ANNOUNCING THE RECIPIENT OF THE 2023 GLORIA EVANGELINA ANZALDÚA AWARD 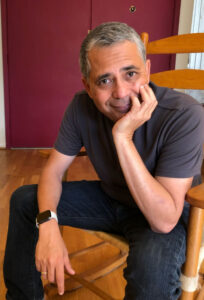 Named in honor of Gloria Evangelina Anzaldúa, a queer South Texas writer and thinker, who did groundbreaking work and whose life as a writer exemplifies the tenets of the Macondo Writers Workshop, the award  honors her life and work. Anzaldúa’s legacy is one of resilience and perseverance and she embodies a lifelong commitment to “the work.” For Anzaldúa, writing meant transformation and discovery. One of her more famous quotes is “By writing I put order in the world, give it a handle so I can grasp it.” We believe the award represents Macondo’s effort to empower a Macondista by offering a space to do the same.

Vicente Lozano grew up on Air Force bases in the Midwest. At 13, his father moved the family from Washington DC to a small Tejano town near the Gulf Coast. He commuted every day between those poorer surroundings and an upper middle class Catholic high school, in Corpus Christi.  Eventually, that culture shock led him to investigate his family’s merchant history in South Texas; over time, it turned into a search to understand his late grandfather’s schizophrenia, how the Mexican community understood it, and how mental illness echoed down through the generations. He attended The University of Texas at Austin, where he earned an honors degree, and went on to earn Master’s degrees in English and Library Science. In 1993, Lozano was awarded a Michener Center for Writers post-graduate fellowship in fiction. After college, Lozano returned to community college and became certified in web programming. He has worked as a public librarian, an archivist, a corporate librarian, a systems administrator and a data visualization specialist. In 2004, Macondo changed his life by offering him a home among a community of writers who bear witness to the precarity of living along the fault lines of race, gender, and color. For 2 years he helped organize the Macondo workshop. In 2007, the Texas Institute of Letters awarded him the Dobie Paisano fellowship in fiction. He lives in Austin with his wife Alyssa (also a writer,) a dog and three cats.

← True Tales of Family: A Reading by Five Macondistas